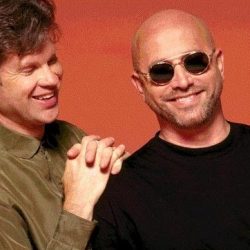 In 2009, Tommy started PayArtists, a startup company whose goal it was to get artists paid by leveraging peer-to-peer music download data.  It would eventually become Muzit, Inc.

Tommy is currently the CEO and founder of Muzit, a Peer-to-Peer monitoring and monetizing venture.  Muzit tracks the downloading behavior of file-sharers, and allows copyright owners to connect with these fans through the Internet Service Providers (ISP’s) to offer discounts, promotions, donations, concert tickets

In January 2005 the Italian record company Frontiers released Tommy Funderburk’s debut album Anything For You, an album featuring several songs co-written by Funderburk, Michael Thompson, Bruce Gaitsch and Greg Mathieson in the style of Toto

In 1995 Tommy Funderburk and bassist David Miner, who Funderburk had known since the days of Andrae Crouch, recorded and released an acoustic collection of songs entitled The Dwelling Place

In 1988 Funderburk met Bruce Gaitsch. They worked together for several years. The song King of Hearts, was a tribute to Roy Orbison which was later included on the King of Hearts album and also became the name of their band. The album was released in Sweden in 1994.

In 1989 the song It’s Not Enough (from the Starship album Love Among the Cannibals), was performed by the group Starship. Written by Tommy and Martin Page, It’s Not Enough rode the Billboard charts for twelve weeks and reached No. 30.

In 1987 Wilson and Funderburk reformed their band, brought in yet another former Seawind member, keyboard and sax player Larry Williams. They changed the name of the band to What If, and released a self-titled album on RCA Records

Tommy Funderburk did the lead vocals on a track called Never Too Late To Start for the movie soundtrack Running Scared. Tommy also participated on an album entitled Voices with a song called Lift up My Voice

In the early ’80s Tommy met drummer Bob Wilson from the group Seawind and  in 1983 they formed the group The Front. The Front recorded a self-titled album, followed by a U.S tour and a European tour the following year.

David Foster and Jay Graydon were looking for a singer for their project Airplay, a role that fell to Tommy.

Tomy’s musical interest began in college where like most musicians he started a band. Tommy’s band was called Sanctuary.

You can use this form to send us a 'quick contact'. It does everything the regular contact form does, but this one's available at all times...